This year, we offered seven weeks of programming. At Fais Do Do, we offered three weeks of our Shakespeare Intensive – each week featured a different theme, including “Family,” focusing on plays like King Lear, Taming of the Shrew, and Romeo and Juliet, and “Shakespeare goes to Greece,” featuring Comedy of Errors, Troilus and Cressida, and Pericles. 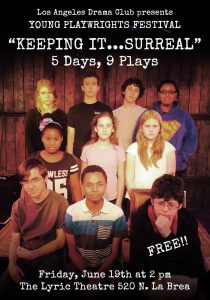 At the Lyric Theatre, we offered two weeks of Shakespeare Intensive, one week of Queen Elinor’s School of Knighthood and Chivalry, and were thrilled to launch the inaugural Young Playwrights’ 10-Minute Play Fest.

Our playwrights were each given the challenge of writing a Ten-Minute play in one week. They were supported by writing mentor, Blaire Larsen, and directing mentor, Julia Wyson, as well as an ensemble of actors – both LADC troupe members, and professional actors – who performed their plays for a public audience at the end of the week. The topics ranged from politics to family dynamics to birth and death – we were astonished and delighted with what they came up with! 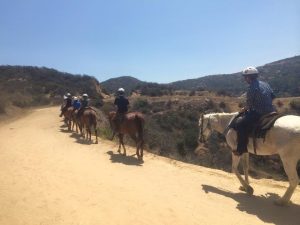 Our young knights learned combat from fight masters Kila Packett and Esdras Toussaint, explored the Art of Storytelling, played Renaissance games like “Nine Men’s Morris,” and  performed a Renaissance Reel for the demonstration at the end of the week. A highlight of the week was our Griffith Park trail ride, where our guide regaled our young Knights with details about the Equestrian Arts in Shakespeare’s time!

We ended the Summer Season by combining our two troupes and heading to Santa Monica to perform and conduct workshops for the Tongva Park Family Saturday series. The Players performed scenes from their recitals, and we taught theater games, Shakespeare insults, Stage Combat and Iambic Pentameter to anyone who happened to be wandering through Tongva Park on this sunny summer Saturday!