“Lost in Translation” – LADC Speaks out on “Play On! 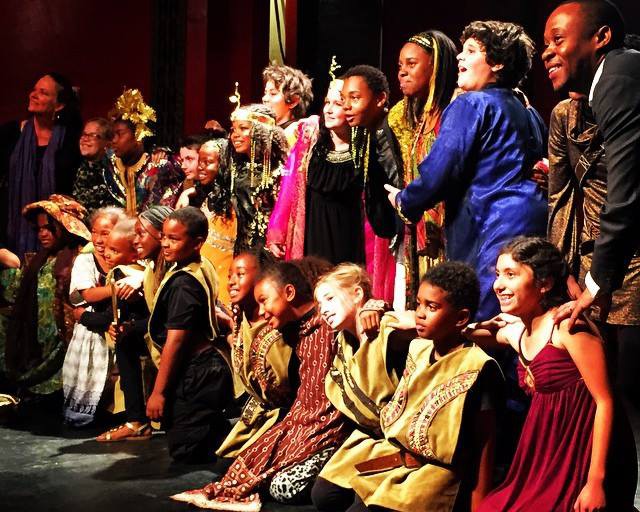 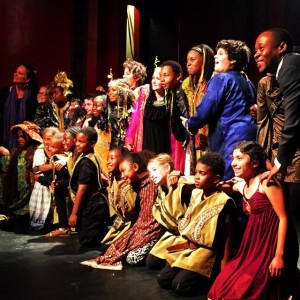 As the country’s Youngest Shakespeare Troupe 10 years running, we’ve been successful in creating a passion for Shakespeare in children ages 5-17. One of our primary missions has been to make Shakespeare accessible to everyone. We mean everyone. We present our young Players with the original Folio text and urge them to dig in to the words, scan the rhythms and ride the wave of the iambic – and in doing so, they have made incredible discoveries, have become empowered with a new rich vocabulary, and – most rewarding – gained a new perspective on life itself. Our children (over 100 of them) perform the plays as written, trusting that Shakespeare can and will do the rest.

Our direct experience directing Shakespeare’s Canon with young people from diverse neighborhoods and incomes, with various learning styles and educational backgrounds, incites us to voice our strong concerns with any institution of power and influence that attempts to “translate” Shakespeare.

However well-meaning, we do not believe that “translations” of the Canon will make Shakespeare “accessible” to the masses: the very presumption that Shakespeare is beyond the scope of a “regular” person  goes against a decade of direct experience with the exact opposite.

The study of Shakespeare is an extraordinary learning tool, primarily because of the way it challenges the mind to wrestle with the language – and why shouldn’t it? Achieving that “Ah, ha!” moment when we’ve decoded words and phrases is part of the joy of great literature. Why should that moment be taken from us by a modern “translation?

The Play On FAQs assure us that “these translations won’t simplify the originals.” Then what will they do? Is it the just the archaic vocabulary that makes Shakespeare challenging?

“He jests at scars that never felt a wound” – most of our 3rd graders (many from underfunded schools, who’ve had little or no arts education prior to us) would have no problem recognizing and defining every word in that line.

“But soft! What light through yonder window breaks?” This might inspire a discussion about the fact that “breaks” has multiple meanings, or what “soft” might mean in this context, but again, nothing that a 3rd grader can’t wrap her head around. How will the “Play On” translations make these beautiful phrases more “accessible” to our students without losing their original magic? The thought that a student’s first encounter with the Balcony scene might be anything different is heartbreaking to us.

So, what about those who aren’t “studying” him – those who simply want to enjoy watching a play? Anyone who has experienced Shakespeare (on either side of the curtain) knows that the key is a cast and production team that has a deep understanding of the text, and can convey it with conviction and passion. If that’s the case, then the play becomes accessible to anyone: from a 9-year-old to a prison inmate. If it’s not the case, then we don’t care who “translates” it – it won’t be accessible.

If the OSF were commissioning 36 dynamic, creative and inspiring, study guides with modern tie-ins, we would cheer them on. But it is stated quite clearly that they mean the works to be performable. We ask why? Sure, someone might go see a production of Migdalia Cruz’s Macbeth, and be inspired to check out Shakespeare’s original, but the likelihood of that is slim. The risk is that theatre-goer now assumes, “OK, I’ve seen Macbeth. Check that one off the list.”

When we think of the inaccessibility of Shakespeare, we’re more likely to consider the price of tickets, or teachers untrained, passionlessly introducing mandated Shakespeare to middle-schoolers. Does a new “translation” solve these problems?

Apologists for “Play On” claim we’ve been editing and tweaking Shakespeare since the beginning. Indeed, we have. These are called adaptations and re-imaginings – something entirely different. In fact, how wonderful it would be to see the extraordinary resources expended in this project to commission original works inspired by each assigned play – imagine a new “Rosencrantz and Guildenstern are Dead” or “Kiss me Kate” or “West Side Story.” Or they might have funded a ticket program to provide low-cost tickets to those who can’t afford $83.30 a ticket (or even $30.00 a ticket). Perhaps a teacher-training program to give teachers the tools to inspire a love of Shakespeare in their students. As noted scholar, James Shapiro said in the NY Times, “It’s likely to be a waste of money and talent.”

We’ve read the many examples cited in articles about the OSF project, and the conceit that these “translations” will make the plays any more accessible seems unlikely. What is likely is that the magic and alchemy that has made Shakespeare Shakespeare  for the last 400+ years will be skewed, even lost. Lost in Translation.