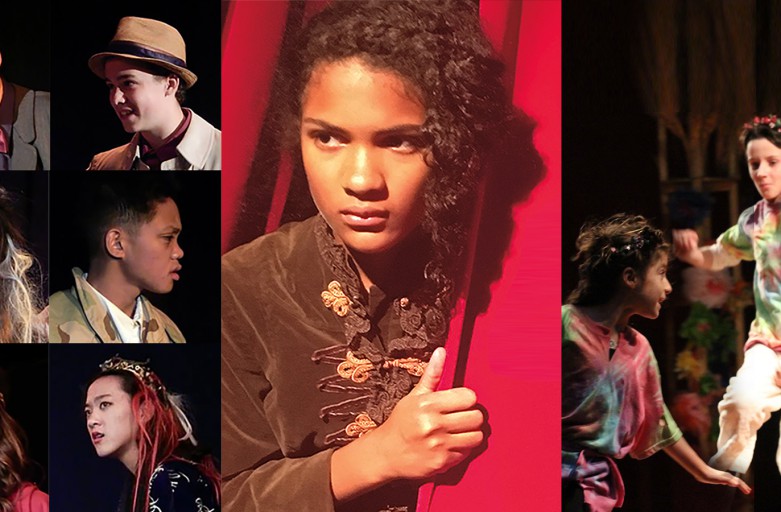 In April, we’ll be presenting Shakespeare Youth Festival LA 2021, live on Vimeo! Our Virtual Box Office will open in March … join our mailing list to be notified of the Festival performances.

A mysterious forest, ruled over by a Fairy King and Queen, and inhabited by all sorts of magical creatures. A bunch of “civilians” who sneak into the forest to rehearse a play. And four young runaways who are fed up with life in The Court, and get caught up in it all. There’s a reason this is considered one of Shakespeare’s classics – come escape with us!!

The Shakespeare Canon is about to be privatized. A group of minor Shakespeare Actor-Characters are held in a Greenroom while the new “Funders” vote on permanent cuts to the Canon. The actor/characters must stand before the Funders and prove their relevance in their respective plays. A bittersweet comedy, its noteworthy theme embraces all marginalized people and groups having to claim their right to exist in a rapidly intolerant society. It also addresses is the life of an actor, asking the question – are all the sacrifices made for a life in the theatre really worth it?

This bittersweet comedy is a SYF original, and was a smash hit at the 2017 Hollywood Fringe!!

Remember That Guy We Love to Loathe? Yes, exactly! Who else?! The Boar … aka Crookback … aka KING RICHARD III!!

With 2020 behind us, we will now freely flash a 2-ton klieg light on what makes a dysfunctional dynasty.  In our Web of Dysfunction, we weave together the best of characters in the play – from the Boar’s right hand, Buckingham, who manipulates him, to his wife Lady Ann who loathes him, to his sister in law, Queen Consort, Elizabeth, who threatens him, to his enemy (Queen) Margaret of Anjou who curses him ….and finally, his Mother, Cecily Neville, who rejects him.