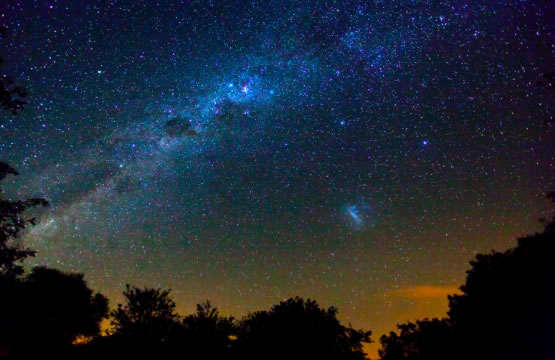 My first night in Motopi, I fled my room to wait it out while the lone misquito had it out with Doom. (See last article — “Dooming the room.”) It was worth it. Standing under the night sky like that I saw things I’d never seen. Which brought up thoughts I never had, hatched here under the night sky.

Why do we go to the moon when in all truth, we’re already on the greatest spaceship ever. We can breathe, eat, move around rotate the sun and we don’t have to put on a space suit, drink Tang or eat space sticks!

I don’t remember having that thought before. I direct Shakespeare for a modest living currently — there was so much star gazing going on back then— hence the references in all the plays to the sky, the heavens, the sun, the stars. I never got it until now. Hard to pull myself away, but a hear a rustle in the bushes so I run inside. The misquito is no more. It’s hot in Chicken’s house. I want to jump in the river, but I am warned there are hippos in there at night.

Donkeys and birds wake me on my first full day. But that is a wonderful sound. What isn’t so wonderful is the ongoing fluttering in a corner of the bedroom roof— like a massive bird’s nest inside the ceiling.

My neighbor “Pinky” is a young, very hard working single mother who lives in a two room house next door. She wears a pink dress to work but that is not why she’s called Pinky. Her job is cleaner of the school floors and toilets — Pinky came over last night and showed me how to “work” the house. The shower water is heated by an electric tea kettle — that water is poured into a plastic tub to be mixed with the cold shower water. Somehow. Then there are the breakers, which Pinky demonstrates. If there are too many things going at once, everything turns off everywhere. Including at Pinky’s house. Electricity is paid in advance. When it’s used up — that’s the end. Go pay it forward.

I am getting in a mindset to meet the school teachers and the students today. No lounging, no jet lag recovery time. Brooks arrives and we sip our instant coffee, jump in his truck and head along the dirt road, sometimes blocked by donkeys, goats and cows. In the light of day I can now see the huts of Motopi.

I get my second Botswana Thought:

What about Unlearning? What about UnTeaching? What if we call it UnTeacher. I am a lifelong Unlearner. How else to make room for new ideas? We should unlearn everything. Even this thought.

There’s no ownership in “being taught” — less discovery, no real joy in it for that matter. Our players prefer when learning their lines is an accident — like while they’re on their feet engaging with each other. We try and untry things in rehearsal all the time. Fixed ideas are a danger. More of a danger than the nest in the ceiling of my bedroom — which I have been told could be a bat’s nest.

The school is a collection of buildings on dirt, overlooking a field. There are classrooms, offices, a kitchen and toilets way off in the field. I hear a rumor that the kids recently killed a python in the schoolyard. I find out later, this is not an uncommon thing. Spiders? The least of our worries.

I meet the school headmistress, Mma Bharata, sitting behind a desk in a tiny dark room. Brooks translates – speaking in Tswana. She does speak English, but this gives us a flow. It’s obvious on Day One, they aren’t sure what I actually do or what to do…with me. I show Mma Bharata what we do at Los Angeles Drama Club by playing videos of our kids on my phone. I know that if I could just have some time with the students, it would become clear. Then all the teachers come in and we meet each other. They’re young and not what I expected. There’s an urban vibe to a lot of them.

Classes start and Mma Bharata brings me around to each classroom. When we enter, the children immediately rise and greet us in English:

From pre-school to seventh grade, they’re in uniform and impeccably groomed.

“Good morning, class. How are you?”

“We are fiiiine, Madame.”

In this first 20 seconds, I realize this is very academic English. There was a warning that the English is not fluent and I would have to go slow. But when I audit the classrooms and hear the teachers talk to them, it’s in Tswana. When I proceed to talk to them in English, their faces look blank. Now what? Shakespeare of course.

I have now audited the classes and it’s Nutrition break. Mma Bharata tells me some of the kids come to school hungry and this is their first meal. It’s not a complaint, just a piece of information. Everyone dips their hands into pails, scooping out what looks like hominy. Sticky fingers everywhere. One grabs my hand – the goo spreads. Great. I assume that this gluey substance just…stays on our hands…until it’s forgotten. I’m right.

I go look for a towel to wipe it off, but I’m physically trapped inside a mob of First Graders huddling for a photo. (the kids crowd in; they have gobs of space, but they love to clump together like one flailing octopus). In the middle of this clump of bodies under the Acacia tree, Botswana Idea #3 comes to me.

Teach them Hamlet. They will get it.

First graders stare up at me. I speak, they repeat. Now they do it on their own. In five minutes, the first words of Shakespeare are officially spoken in Motopi — by a group of six year olds.

To be or not to be. My favorite teacher, Miss Hayes, was an archaeologist, and she was always coming back from a dig or some kind of adventure. I remember her because of her storytelling. It was about what she had JUST DISCOVERED. It felt so alive. Everything felt like it was happening now. The teachers in Motopi are required to teach out of books. But when they break the pattern of that and speak from their passion or experience, everyone wakes up. I feel so lucky – this is ALL I get to do – tell stories, speak from my passion and wake everyone up. The women teachers in Motopi are nurturers but they also have fire. The first one that catches my attention is Teacher Gertrude. And she knows about Hamlet’s Gertrude. Could Shakespeare have known that 400 years down the road, a woman in Botswana will be talking about her given name being a one of his characters? She invites me to her classroom after Nutrition. A bell is rung and the children run into the buildings. The yard is quiet.

This is the language of the heart and the iambic feet matches a heartbeat. Could Shakespeare have been walking through hills while he thought up the speeches — was his heart pounding louder than usual? This is really a theory.Once they got the 5 Feet (dee-dumbs), Gertrude’s class receives their first Iambic Pentameter line: the one we like to start with at L.A. Drama Club:

Uneasy lies the head that wears a crown.

No writing! We are up on our feet. Every word conveyed through tone and gesture. UNEASY is not the opposite of “easy,” so we look for a synonym. Uncomfortable…not quite….unsafe. They know this word. They get UNSAFE.

We stand together, acting out what “unsafe” looks like in our bodies and faces. I ask, “Who is a person who wears a crown?” No blank stares. A tiny voice calls out: The Queen. I thought it interesting Queen was thought of before King. Now we talk about POWER.

Why should a queen feel unsafe? Castles, mansions, fame and money…why unsafe? Can a Queen ever rest? What if somebody wants to take her crown? Maybe she worries all the time! Invaders, Heretics, Cousins….

Botswana president, Ian Khama*, is a conservationist. Brooks tells me how he has re-purposed the Botswana army to shoot only poachers. Also, in this country, no cammoflauge allowed! It’s no“fashion statement” over here. So in this case, this Botswana “head that wears a crown” might feel uneasy over concern about the elephants being shot for tusks in the Kalahari. They understand that analogy. They get it. Miss Gertrude translates just in case. Hands go up. Every single one of them now wants the opportunity to to chant it alone, in front of their peers.

It’s been twenty minutes and Gertrude’s Fourth Grade class shows a visceral, personal understanding of this one Shakespeare line from Henry IV. They also get to ponder how getting to the top of the Power Food Chain has a price.Then my favorite thing happened:

They ask for another line of iambic pentameter.

This is when I say to Gertrude, “I think we can put on a show.” Gertrude is ahead of me. “You’ll have your show.” I am heartened that there are curious teachers here — teaching curious children. And I have hope that Motopi School — in the middle of nowhere — will soon be the “Youngest Shakespeare Troupe in Africa.”

The hominy stuck on my hand has dried. And for the rest of the day … it goes unnoticed and forgotten.