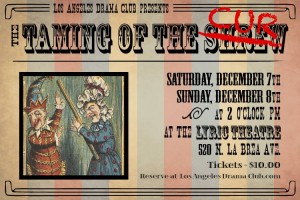 Fall 2013 saw the launch of our informal “Subversive Shakespeare” series. Purists, head for the hills. We subverted the established opinions and “schools of thought” on the already controversial “Taming of the Shrew,” turning conventional concepts on their 16th century heads. What happens when Petruchia, a single-minded young woman, determined to marry well, meets Jake, otherwise known as the Shrew … er, that is, the Cur? His younger brother Bianco has all the girls in a tizzy, but thanks to the boys’ stubborn mother, they can’t do anything about it until Jake is married off. We were delighted with the results – and that final monologue that has puzzled and infuriated generations of actresses? It’s a whole different story when a young man speaks it! 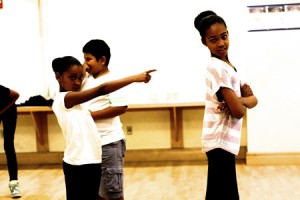 We were also thrilled and honored to be named “Community Champions” by PBS SoCal. They sent a documentary crew to Fais Do Do to film our SITC Players as they performed “Shakespeare’s Characters: Speaking Truth to Power.” The troupe embodied characters from the Canon who display elements of courage in the face of corruption, poise under pressure, and who spoke their truth to the powers that be.

The result was two mini-documentaries – one that aired throughout December 2013, and a segment on LaART, PBS SoCal’s original show celebrating the Arts in Los Angeles.