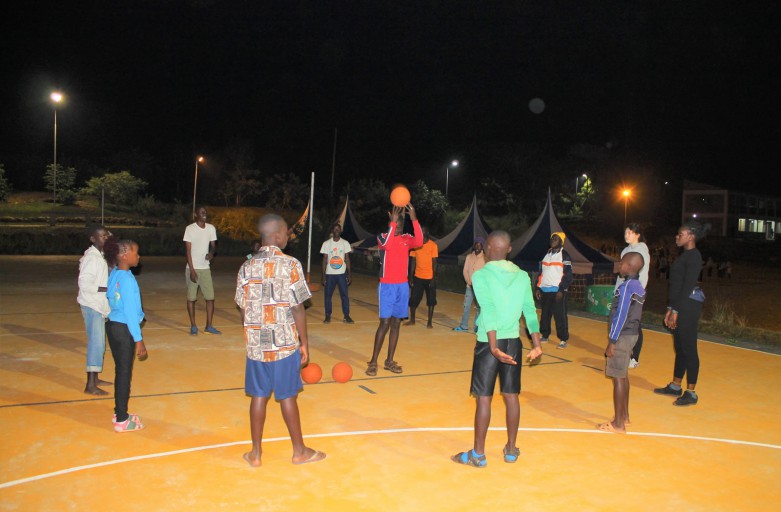 Before the sun rises, we all rise and hit the track at 5:45 am. There, the eighty-eight kids, the Sauti Kuu staff, interns and our team break into groups for Basketball, Boxing, Soccer, Yoga. LADC teachers were honored to lead the opening warm up and closing Savasana.

Off to breakfast of Mandazi, hard-boiled eggs, watermelon, and lemon grass tea – everything grown on the Sauti Kuu land.

After breakfast, we break into rotating groups – about 15 children each – exposing them to Stage Combat/Sword Fighting, Storyteller’s Theater, Dance, Laban Effort-Shape (in English and Luo), Improv, Trust & Team Building Games … and the story of Hamlet. We introduced to them the idea that this writer called “Shake Speare” (we would have them hold up an imaginary spear and shake it to remember the name) was the son of a glove maker from a rural village very much like theirs. The village of Kogelo has many similarities to Stratford-on-Avon in Shakespeare’s time and the stories of Shakespeare also rang true here.

In the afternoons, we work with our groups, exploring the text of Hamlet, as well as selections from As You Like It and Troilus and Cressida, and working together with the children, we begin to devise theater pieces, weaving together music, movement and Shakespeare’s text. As our pieces come together, we give our translators sections of text, which they translate into Kiswahili and Luo – scribbling them on paper, as we don’t have a computer and printer handy …

For most of the children, English is their third language, but not only do these children take to the text, but they rise to the occasion with passion, flare and style.

Dinners are delicious – usually a stew of meat, chicken or fish, with rice or Ugali, and cabbage and greens, with watermelon for dessert – cooked over fires in the cooking hut. All the produce is grown in the Sauti Kuu gardens, and the meat has been raised on nearby farms.

Many evenings, after dinner, we gather in the Community Room for dance parties – all the children know the steps to exceptionally complicated line dances (we managed to master only the simplest of them), or they make a circle, and mirror the steps created by the child who takes the center stage.

Thanks to our benefactors …