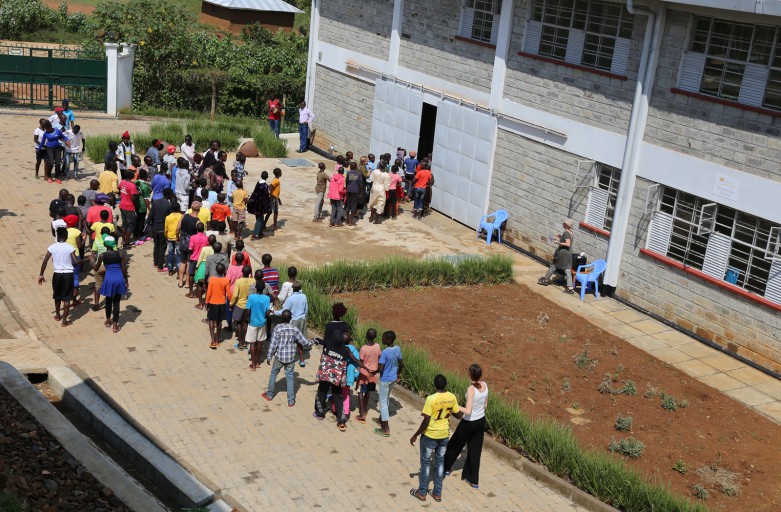 The Opening
Choreographer – Anniwaa Buachie
All eighty-eight children entered in a procession from the four corners of the Sauti Kuu grounds, performing a traditional Renaissance line dance to traditional music from Shakespeare’s time. Then, the music switched to a favorite song from our nightly dance parties, and while the steps continued, the energy shifted into a raucous celebration.

“We worked with children aged 10 – 12 on a monologue from Troilus and Cressida about Time. Utilizing the monologue, we created a piece fully devised by students, incorporating movement and performed mainly in Luo and Swahili. It was very lyrical and symbolic and emphasized the role Time plays in our lives – it’s not about how much time we have but what we do with the time we are given. It was a great success!”
~ Anniwaa Buachie

“I wanted to stage the “Seven Ages of Man” speech by Jacques from Shakespeare’s As You Like It, because I felt it encapsulates the different experiences we feel as human beings from the time of infancy to our last breath. It is a universal speech that is easy to understand, because we are all taking an active part in the Seven Ages of Man at this very moment. I also though it would be important to translate some of the text into Luo, because it gives an even better understanding of Shakespeare’s universal theme to the young minds who are performing and the audience. Through improvisation, movement, and stagecraft, we created a timely and often humorous portrait of our own shared humanity while incorporating the unique cultural expressions of the children’s Kenyan homeland.”
~ Kila Packett

“We worked on the Call to Action scene, dividing into the multiple “voice” of King Hamlet as the Ghost. This allowed for Sauti Kuu interns, Wasio and Edu, to take leadership roles as we divided into two groups to rehearse the Ghost’s Speech and Hamlet with Horatio and Bernardo. Then, we would come together to blend the two – we alternated so that the Interns could have the experience of directing both groups. The Green Giants had a massive breakthrough when Dr. Obama stepped in with some creative exercises of her own! One evening we had them run their lines in groups of two while we surrounded them, trying to distract them from their tasks. They had to hyper-focus on their work and this created a tone for them which they used forthwith! The performance went through the roof – if there was a roof – but like in Shakespeare’s day, they performed under the approving skies!
~ Blaire Baron

“On the first day of our time together, we explored the dialogue between Hamlet and Gertrude in the famous ‘Closet Scene.’ Initially, the actors were a little timid, as they worked to understand this conversation, not only in their third language, English, but in a form of English that they had never heard before. But as our poet-and-translator-in-residence, Leah, helped us explore in Luo, as well, our actors became brave, and the emotion of the characters exploded. We staged this portion of our performance as a relay, with teams of Hamlet/Gertrude duos, racing in to take over the action – first in Shakespeare’s English, then in Luo – until Polonius met his fateful end. In performance, this was preceded by the Play-within-a-Play, with music and movement, and much energy and humor, as the actors created archetypal portrayals of the Queen, the King, the buffoonish Polonius, the innocent Ophelia, and, of course, troubled Hamlet. Following the “Mother/Son Relay,” two Ophelias shared the poetry of her grief at her father’s death, and their embrace at the end increased the poignancy of the moment.”
~ Julia Walker Wyson

“I believe it was Sam Mendes (stage director) who said if you have 20 other imaginations in the room with you as a director you’re an idiot if you don’t use those imaginations. That advice worked in my favor while working with my group at Sauti Kuu Foundation. These young adults had a life experience that was as universal as Shakespeare while at the same time uniquely Kenyan. I wanted to draw on both of those truths. We started by having a real conversation. That was when our story began to take shape. Yes, we used Shakespeare’s text, but this HAMLET was completely their own: bold, raw, and fresh.”
~ Esdras Toussaint

“I challenged the Jayhawks with the task of devising a theatre piece exploring the themes and text of Hamlet’s ‘To Be or Not To Be’ soliloquy. Not one of these kids had seen a ‘western’ idea of a play before, let alone Shakespeare. However, we used their favorite movies, (one being Avengers: Endgame) to help us create our own vocabulary. We used their traditional chants and dance as well as Shakespeare’s text translated into Swahili as well as Luo to present their story. We talked about everything from Love and friendship to suicide and depression. Sometimes three languages were being spoken at a time to get across someone’s own experiences as some kids barely spoke Swahili or English. The kids chose to make the piece light rather than dark and explore the idea of choosing life even in the face of the lowest forms of despair. At the end, they yell to the heavens their answer to Hamlet’s question: “I choose to live!” finally culminating in a chant of “TO BE OR NOT TO BE; I KNOW THE ANSWER.”
~ J. Bailey Burcham