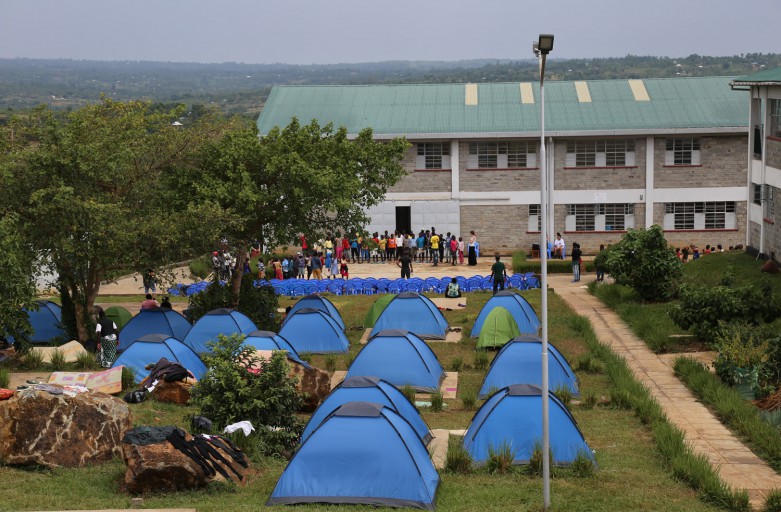 GO Campaign called us last January. The Founder was in Africa sitting with Dr. Auma Obama. He asked if we could to come to West Kenya in August to run a theater program while the local children were out of school.

When it comes to children and theater, historically, SYF says “YES!” first, and then figures out the “HOW?” … and we always do. Eight months later, eleven of us raised the funds to travel to the rural village of Alego/Kogelo and put on a show at the extraordinary center, created by Dr. Obama – The Sauti Kuu Foundation. If you haven’t heard of Sauti Kuu, take a moment to to treat yourself to what Dr. Obama has created in her village.

Founder & Artistic Director Blaire Baron said “yes,” then Executive Director Julia Wyson said “yes,” then a parent said double yes by offering to underwrite our flights. Then our staff of Teaching Artists – one by one – said yes, and agreed to raise funds to cover their flights. We added four of the teens who had grown up with SYF, and Celina, the godmother to one of the teens, offered to come along as Stage Manager/Logistics, and suddenly we were eleven. Eleven asked, eleven on board. We’d figure it out. And we did!

We came to Kenya with our professional backgrounds, our training, our lesson plans and eleven open minds – we left forever transformed and enlightened. Eighty-eight children camping together – the bonds that happened while gathering to tell stories, to sing, to dance, to share – to create theater. Our task here was to put on a piece of theater with all eighty-eight children at the end of 7 days.

We not only did that, but we are quite sure the Sauti Kuu children made history – they performed passages from Shakespeare’s Hamlet and other pieces (7 Ages of Man, Troilus and Cressida) in three languages: English, Kiswahili, and (the first language for many of the children) Luo.

Thanks to our benefactors …